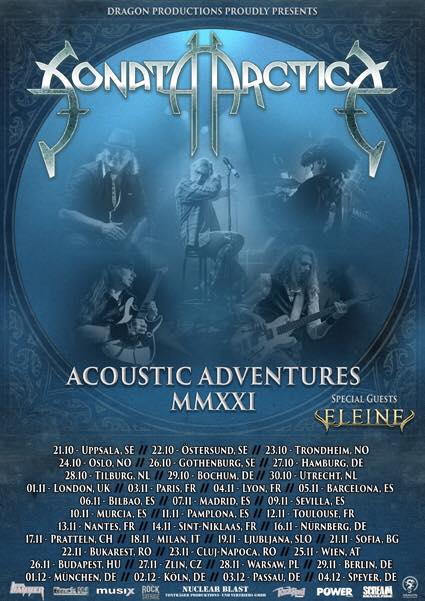 Finnish melodic metal titans SONATA ARCTICA are a band with a unique sound, driven by different emotions and a touch of melancholy. Today, the band announces the release of their first acoustic album, perfectly entitled „Acoustic Adventures – Volume One“, to be released in October 2021 through Nuclear Blast Tonträger Produktions- und Vertriebs GmbH.
„This acoustic form of SONATA ARCTICA has been slowly brewing for years“, comments vocalist Tony Kakko and explains: „The first manifestation of it, besides the few acoustic versions of songs released throughout the years, was the „Acoustic Adventures Tour“ in 2019, which proved to be a great success, sparking an idea to get these songs also recorded and out on an album. Or two albums, at least for starters. Our songs have always been based on beautiful melodies, which makes it very easy to transform and rearrange them perfectly into the acoustic form as well. I should mention that many of the songs work so well dressed in acoustic garments.“
„Acoustic Adventures – Volume One“ will be the first part, followed by a second acoustic record, to be released in 2022. „I hope you love these albums as much as we do. There are many, many songs we had to leave out of these ”Volume One” and ”Volume Two” albums, so nothing would please me more than adding few more volumes in the future“, smiles Tony Kakko and adds: „Looking forward to seeing you on tour again as soon as possible!“
And this tour is hopfully going to happen in autumn, entitled the „Acoustic Adventures MMXXI“ tour. It’s been a while since SONATA ARCTICA toured Europe, the last time being in 2019. To promote their „Acoustic Adventures – Volume One“ release, the band will embark on a journey through 17 European countries! Support will be provided by Swedish hopefuls ELEINE, who will also be presenting an acoustic set. Keyboardist Henrik “Henkka” Klingenberg comments: „Since our Talviyö World Tour is more or less over, it’s time to look ahead for the next challenge and since we’ve had so much fun with the acoustic stuff we decided to make an album as well, and of course we will hit the road immediately after that to celebrate the release of it. As of now we have managed to set up an extensive European Tour and we’re really looking forward to getting out there an play some music for all of you.“
SONATA ARCTICA
Acoustic Adventures 2021
Special Guests: ELEINE
presented by Metal Hammer (Ger), Rock It (Ger), Musix (Ger), Rock Hard (F), Power (ES), Rocksverige (S) and Scream